Jerrad Tyson began his footballing career as a youngster at Sunshine Coast McDonald’s Premier League side Maroochydore Swans from a young age!

The Australian Institute of Sport quickly recognised Tyson as one of the outstanding Goalkeepers in Queensland and snapped him up as he relocated down to Canberra.

In 2008 he returned back to his roots, however this time he represented The Fire colours for the first time in his young career. As a teenager Tyson was given the number 1 shirt and thrived in what was the National State League. In 20 appearances for our football club, Tyson went on to win one NSL Championship before a move to Brisbane Strikers.

A talent of Tyson’s would only grow and hence a move to the newly formed A-League team, Gold Coast United in 2009 formed. Being an understudy to A-League legend Glen Moss for 3 seasons as well as multiple A-League appearances including making his A-League debut on the 1st of December 2010 against North Queensland Fury would springboard Tysons career. A bright future was ahead as loan moves to North Queensland Fury and Olympic FC followed.

On 2 August 2012, it was confirmed he had signed with Western Sydney Wanderers. After a season and a half being the back-up goalkeeper, Tyson made his debut against Perth Glory following a groin injury to first goalkeeper Ante Covic and kept a clean sheet in impressive fashion.

On the 24th of June 2015, Perth Glory came calling and both parties agreed a two year deal. After only two appearances in a successful FFA Cup run, Tysons time would come to an end in the West.

A day after leaving Perth Glory, Tyson re-signed with Western Sydney Wanderers. He would go on to further his A-League reputation as this stint would be his most prominent.

Moves to India in the I-League for Chennai City and closer to home with South Melbourne would follow.

Tyson would eventually find a home away from home in the form of Green Gully in 2019 playing in the Victorian NPL. Half a century of appearances for the Kealba based side would leave him in good stead for his next move.

Rumours began to flow about a potential move back to the Sunshine Coast, not before one last A-League club came calling. In late 2021, one of Australia’s biggest footballing teams came knocking, Melbourne Victory signed Tyson to an injury replacement contract. Making appearances for The Victory, Tyson would go on and be the hero in a dramatic FFA Cup penalty shoot-out.

Early 2022 it would all come full circle as a 14 year journey which would take Tyson all across the Southern Hemisphere with prominent roles with A-Leagues clubs, National Premier League stints, appearances in India and Hong Kong which all culminated towards a move back home to the Sunshine Coast! 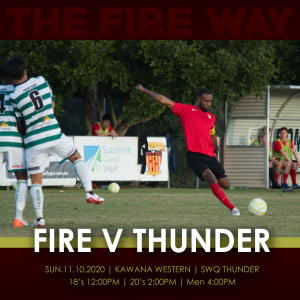