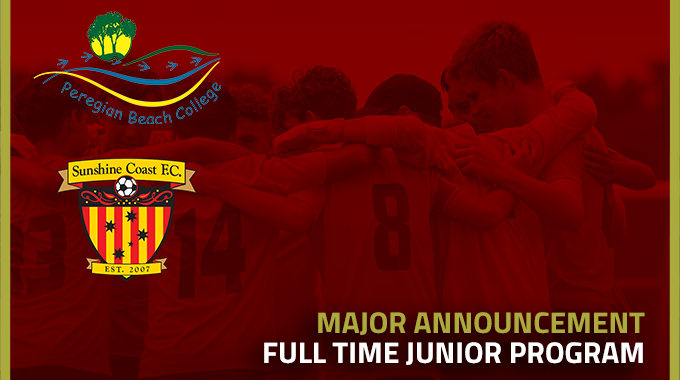 Sunshine Coast FC has teamed up with its educational partner Peregian Beach College in a ground breaking Academy program designed to nurture young talent on and off the football pitch.

Sunshine Coast FC has an extremely proud history of developing young footballers many of whom have gone on to play at State, Professional and National team level.

The Academy program which is believed to be the first of its kind in Australia, will see young players from U9 – U13 from Sunshine Coast FC combine football and education on a daily basis. The program will see students from the Club train up to 3 times per day. The program will directly mirror the highly successful English Premier League (EPL) and English Football League (EFL) programs.

Each Scholarship player will receive a fully funded private education as well as an intensive football development program. Student athletes will remain with Sunshine Coast FC from U9 right through to open age.

The project is spearheaded by Melvyn Wilkes in his role as Technical Director of Sunshine Coast FC & Sunshine Coast Sports Club. Melvyn has vast experience in the implementation of these types of programs having set-up and successfully run programs whilst at Manchester City and West Bromwich Albion FC. Both of which have proved to be an excellent breeding ground for top-flight players.

Melvyn said” the program is currently open to players from Sunshine Coast FC U9 – U13 players and is not to be mistaken as a school based excellence program in which players from other clubs can participate. However players from other clubs may apply, and if selected they will become a player for Sunshine Coast FC. “The program is designed specifically to accelerate player development, and you only have to look at other countries who are running these types of programs to gain an understanding of how they are developing players quicker.

“As a club this development has been on the cards pretty much since my arrival back in 2015, although back then for many different reasons it was not the right time. The culture we have worked hard to create in our Club and the staff we have involved, along with the proactive approach from Wayne Kennedy, Peregian Beach College Principal makes it the right time to move our program forward”.

“Peregian Beach College is an independent private school from Prep – Year 12 with an outstanding educational program. The Academy timetable has been cleverly developed by the academic staff without cutting any corners, to ensure each student athlete receives a top class education coupled with a full-time football training and games program. The program will be delivered by myself as a UEFA Diploma holder, along with Gareth Thomson ex-Celtic FFA B and now Head Coach for Sunshine Coast FC, and Tom Bateman ex-Manchester City and England Youth Futsal player and UEFA B coach.

Peregian Beach College is also the destination for the proposed state of the art training complex which will include a synthetic field, indoor arena, and eventually on-site student / athlete accommodation, which will supplement the existing College facilities. Existing facilities include a Hard Court surface for Netball, Basketball, Tennis, and a 25 metre swimming pool.

Noel Woodall, Club Owner and Managing Director for Sunshine Coast FC said “This is a very exciting project. There are a lot of talented youngsters on the Sunshine Coast who will now have the opportunity to be developed into some of the best footballers in the Country. As well as gaining a top quality education virtually cost free. Our aim is to offer this unique program to young student athletes, with the hope it will serve as a platform to accelerate the development of the young athletes to enable them to move forward. Whilst also ensuring each student athlete receives a quality of education, which will prepare students for life after sport, be it University, Business or some other area of employment. 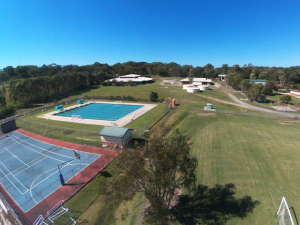 The Football Academy program is scheduled to commence start of Term 3 2020, which is scheduled for week commencing Monday 13th July 2020.

Any parent / guardian of a player who wishes to express their interest in the Full-Time football program with Sunshine Coast FC, are asked to email Technical Director Melvyn Wilkes on melvynwilkes@sunshinecoastfc.com.au

Any interested club or organisation from any of the other above sports who wish to discuss partnering with Peregian Beach College, can email our Director of Sport on sport@pbc.qld.edu.au to arrange an informal meeting and or tour of the College campus.

« Message From Our Technical Director

Gareth Thomson: “We’re Ready To Take The Next Step” »