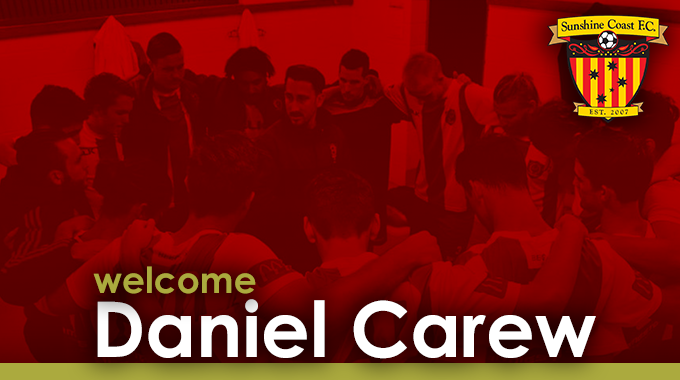 Sunshine Coast FC would like to announce the appointment of Daniel Carew as the clubs Senior Head Coach.

“After spending several years investing significant time and money in the Junior development program and Full-Time Academy at our Club, our attention now turns to the advancement of the top 3 teams at the club (U18 – Senior Men’s)” said Noel Woodall, Managing Director of the Fire.

As with recent local and National media announcements, Sunshine Coast FC have now positioned themselves to be in the Inaugural group of teams that will form the make up of the proposed National Second Division (Championship).

Our club has been strategically working on the National Second
Division For over 3 years added Melvyn Wilkes, “as much as some people from outside looking in would have seen some pretty indifferent results and performances over the past couple of years, our club Management have still invested in our Senior team, however, it has not been at the expense of our Junior program and our ongoing philosophy.

Gareth Thomson has until recently been overseeing the Senior Men’s team with Gary Newcome, this combination has helped to bring stability back to the Senior team after relegation from the NPL in 2019.

Wilkes continued “Gareth and Gary have done exactly what we had asked of them, which was to stabilise and galvanise the top end”. “Both coaches have known for a number of years about what the future looks like with the National Second Division and the work that has been going on behind the scenes, and both will remain at the club with Gareth helping grow the Junior development program, and Gary assisting as part of new coach Carew’s backroom team.

“Both Gareth and Gary were both heavily involved in the process of bringing Daniel Carew to the club“ said Wilkes, Our culture at the club is hugely important to us and something we have worked on to ensure it’s an environment for players learning and for members to enjoy.

Wilkes said, “We had identified Daniel (DK) Carew a couple of years back, as he had previously worked in our youth development program and had success, he has done a tremendous job locally blooding young players at Beerwah Glasshouse United, and the way he has developed the Senior section at Beerwah made the decision to bring him back to the club an obvious and easy decision.

DK will fulfil his current commitments to Beerwah for the remainder of the season, however, he will also be working closely with our Senior Management team to identify and line up potential targets for the 2021 season, as well as working on targets for the 2022 Championship campaign.

We wish Daniel and his staff all the very best and we thank Beerwah for allowing us to speak with DK and secure his services in returning back to our Club.