The Sunshine Coast Fire have gone within seconds of recording their first loss of the season, after scraping a 1-1 draw with the Whitsunday Miners in contentious circumstances.

Tyson Holmes converted a penalty deep into injury time to salvage a point for the Fire, who went a goal down on 87 minutes when Jamie White scored for the Miners.

Whitsunday will be bitterly disappointed not to come away with three points after quelling the Fire’s attack for 90 minutes and leading with only seconds to play.

With both sides coming into the contest fresh from morale-boosting victories, it was a spirited opening to the match. Takanori Sato almost opened the scoring for the Fire on four minutes, connecting well with a header that only cleared the crossbar by inches.

For the Miners, Jordan Corte moved well down the flank before hitting a cross into the danger area, but no Whitsunday players were on hand to take a shot. Soon after, Clark Bradford was unlucky not to score when he cannoned a header into the crossbar and out of play.

As the first half continued, the Fire were being outworked by an industrious Miners side. In one of the Sunshine Coast’s first moves forward, a well-worked move down the right wing gave Shaun Blackman a chance, but Miners keeper Brad Moss intercepted to clear the ball to safety.

Though not looking particularly threatening in attack, Whitsunday were doing well to negate the Fire’s attacking play and prevent scoring chances. After a play down the left wing, Tyson Holmes gained possession in the penalty area, but shot well over the bar with his left foot.

Clark Bradford and Jamie White both had chances from outside the penalty area for the Miners as half-time approached, but neither troubled Antony Hall in goal for the Fire

The whistle sounded for half-time in what was a largely uneventful contest, with neither side able to stamp their authority on the game. After scoring 14 times against Capricorn last round, the Fire seemed unable to breach the organised defence of the Miners.

Leon Dwyer had a chance early in the second half, connecting well with a header and forcing a save from Miners keeper Brad Moss.

After a slow start to the contest, the game began to open up as both sides looked to win the midfield battle. The Fire had their best chance of the match on 53 minutes. In his 50th match for the club, Greig Henslee did well to read a cross from Jason Hicks and got a free header at the far post, but could only guide the ball into the crossbar.

With the Fire beginning to find some much needed fluency, Ryan Smith got on the end of a long ball at the far post, but headed the ball into the side netting.

Midway through the second half and with the game still scoreless, tempers were beginning to flare from both sides. Miners coach Graham Harvey was ordered from the field for dissent, and the action on the pitch continued to heat up.

Whitsunday substitute Matthew Zappone almost made an immediate impact as he was put through on goal for a one-on-one opportunity, but Antony Hall kept his cool to make a strong block and deny Zappone the opening goal. Minutes later, Takanori Sato was dispossessed and Jamie White moved in on goal, but again Hall came to the rescue to keep the Fire in the game.

Despite his best efforts, there was nothing Hall could do on 87 minutes when Jamie White dribbled into the penalty area and smashed the ball home. With only a few minutes of regular time remaining, it looked as if Whitsunday had done enough to stage a big upset.

After a second half littered with stoppages, there was a long period of injury time to be played. In the 95th minute, and with the Miners pleading for the final whistle to be blown, the referee spotted a push in the Miners penalty area and awarded a spot kick to the Fire.

Despite the protests of the visitors, Tyson Holmes coolly converted from the penalty spot with the last kick of the game to snatch a 1-1 draw. Although the decision to award the penalty sparked fury from the Whitsunday players and officials, the Miners would have to settle for a draw against the reigning premiers.

“I thought we were atrocious today – if we’re going to perform like that, we aren’t going to win anything. The Miners were up for it, they’re a good side, but we didn’t win our personal battles and in the end we got found out, but we’ll take the point.”

Hudson agreed with the referee’s decision to award a contentious late penalty.

“The official did get it right – it was a push in the back. It’s debatable, but I think they (Whitsunday) deserved the three points.”

The Sunshine Coast will look to make amends next weekend when they travel to Bundaberg to take on the Spirit. Kickoff is at 7pm on Saturday May 14, at Across the Waves Sports Grounds in Bundaberg. 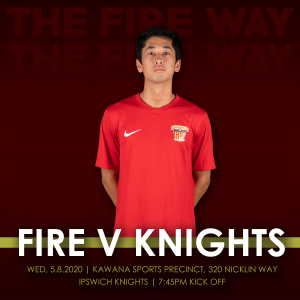