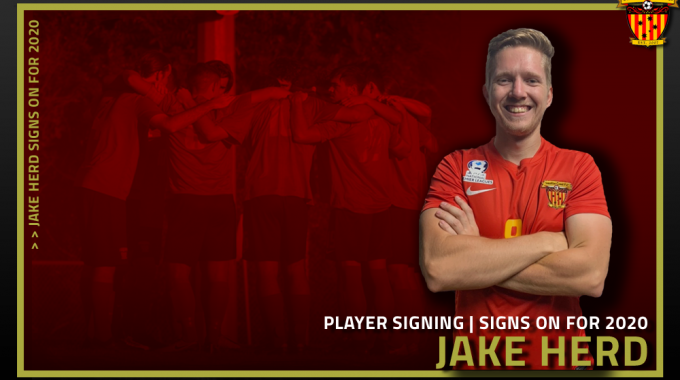 Sunshine Coast Football Club are delighted to announce that central midfielder, Jake Herd has signed on for the 2020 season.

The 24 year old signs from Brisbane Premier League side Caboolture FC, who he joined mid-season this year after returning from the UK.

Originally from the Sunshine Coast, Jake moved to the UK as a youngster and played the majority of his youth football with Football League side Torquay United before spells with Bath City, Radstock Town and finally Warmister Town FC.

We caught up with Jake to find out what attracted him to sign with the Fire this year:

“Playing for the Fire has always been something I wanted to do, watching the games and following the highlights for years while I lived in the UK. So when the opportunity arose, there was no way I could turn it down.”

For Jake it’s not just about winning on the field, he also spoke about helping develop the club culture:

“My aspirations and targets are much more than winning on the field every week. I really want to help develop that family atmosphere throughout the squad and the club as a whole. We win together and we lose together” he said.

Jake’s first impressions of the environment & squads have been good:

“We are a few sessions in and already you can see the desire and attitude to win coming from the coaching staff and being instilled into all the players.”

“The intensity and standard is increasing with every session and the team is growing closer together every time we meet up. I am seriously looking forward to the season ahead” he added.

Senior Coach Gareth Thomson spoke of his delight in signing Jake for next season:

“I’m over the moon to get Jake in as he ticks so many of the boxes in regards to what we’re looking for this year. Not only is he versatile positionally but he’s a big communicator on and off the field and is really going to dictate the tempo of the game from midfield.”

“I’m delighted that Jake has placed trust in our vision for the club going forward and I can’t wait to work with him this year” he added.

Welcome to the Fire Jake!